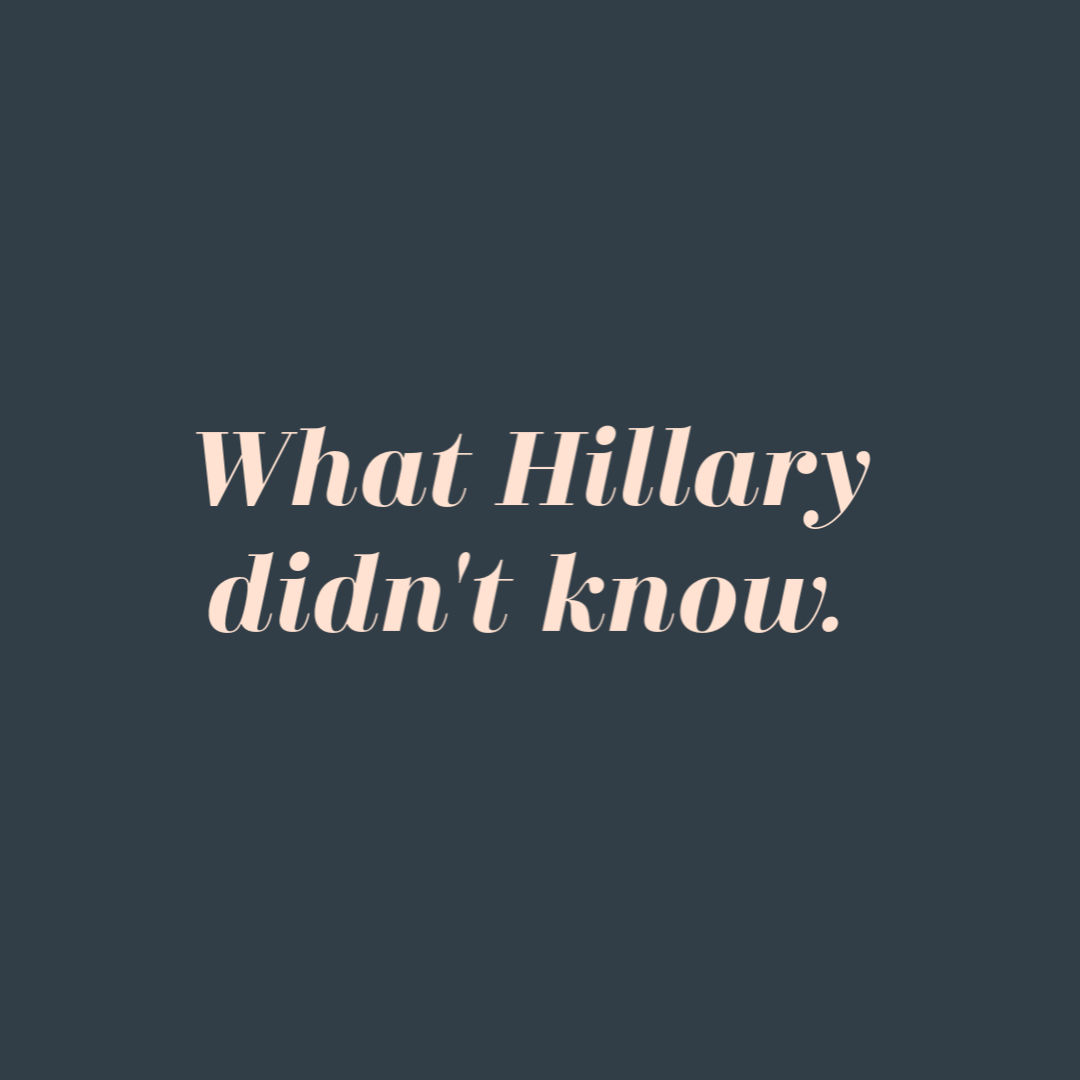 Today I want to let you in on a secret.

A secret that unfortunately not even Hillary Rodham Clinton knew and which could have served her well in her election campaign. And it might also serve Joe Biden in the upcoming debates.

I am talking about a concept that was first introduced by Dr. Peter Modler, a German management consultant, coach and author. Dr. Modler has specialized in restructuring companies on the verge of bankruptcy. What he found out was that the companies which had women in the top management were more likely to recover. He also found that a lot of these women didn’t know how to deal with the power games the men played they worked with.

What he invented is a step-by-step model of effective communication: High Talk, Basic Talk and Move Talk.

High Talk is what we are taught in our professional training and studies - to convince through argumentation. Intellectual, well thought-out, sophisticated. Most women managers feel very comfortable with this form of communication. We think "as long as I provide the best arguments, nothing can happen to me".

We do not consider that there are two other forms of communication: Basic Talk and Move Talk.

You might not be familiar with it – but every day you are confronted by it. Especially if you live in the U.S. – because the current U.S. president is a true master in Basic Talk and Move Talk.

What is Basic Talk?

Basic Talk is when you ask a colleague for some numbers, that he needs to provide and he answers you disparagingly: "None of your business.”

Basic Talk is when you want to start with your presentation and a colleague says in front of the assembled crew: "That skirt looks really hot on you."

Basic Talk is when the sitting president says “Sleepy Joe”, or “Lock her up”.

Of course, Donald Trump is taking it to the extreme. However, in a any company in the West, we experience Basic Talk, if not every day, then at least every week.

So how do you deal with this?

And here it comes, ladies: You do the opposite of what you normally do. You don't discuss, you don’t show you are outraged, you don't explain.

You don't have to explain to the person you're talking to that the task is part of their job description, or that a statement about the skirt your clothes is not appropriate, or that in fact, Hillary Clinton did not commit a crime.

Because the guys (and it is mostly guys) who use Basic Talk already KNOW THAT! They know the facts. And they know they cannot win an intellectual argument – THAT is why they are deflecting with Basic Talk.

According to the communication hierarchy mentioned above, High Talk, i.e. argumentation, is extremely popular, but is the weakest in terms of its effectiveness. Basic Talk is much more effective than High Talk. So you have to resist your impulse to argue with your colleague, but you have to go to the level he understands. And if he speaks Basic Talk, you must answer at least in Basic Talk.

I will share now one technique you can use to counter Basic Talk. Here is goes:

"You look really hot in that skirt." follows a stare at your opponent, followed by a very slow “No (pause) skirts.” Another long stare. And then you go on what you were meaning to do in the first place.

And after "Lock her up.” you say look very serious and you say very slowly “No.”

This is extremely difficult, especially for women. When we are attacked, we are often surprised and feel powerless. We want to reply and we think we should be quick-witted. This is almost impossible and not even necessary. If you are attacked with Basic Talk, it is sufficient to respond with Basic Talk. Slowly, without laughter.

All you have to do is use one word, and repeat it over and over, very slowly. And then you move on.

Now, you will feel very stupid while you do that. Because you think “I look so stupid. I need to defend myself.” You need to wrestle down that instinct. In fact, the more stupid you feel while you say your one word slowly, the more effective it probably is.

Because the point is to show your opponent that you are not being rattled – no matter how outrageous he behaves.

Now I'm asking you to practice this. On the next Basic Talk attack, only one word - for example, the "No".

In my next post I will write about the next step in the ladder - the Move Talk. It is even more exciting and powerful. And there I will also reveal the secret that would have helped Hillary during her campaign debates.

P.S. You can read more about bestselling author Dr. Modler's model in his German book "Das Arroganz-Prinzip" (The Arrogance Principle: How women have more success in business). Unfortunately it is not available in English yet.