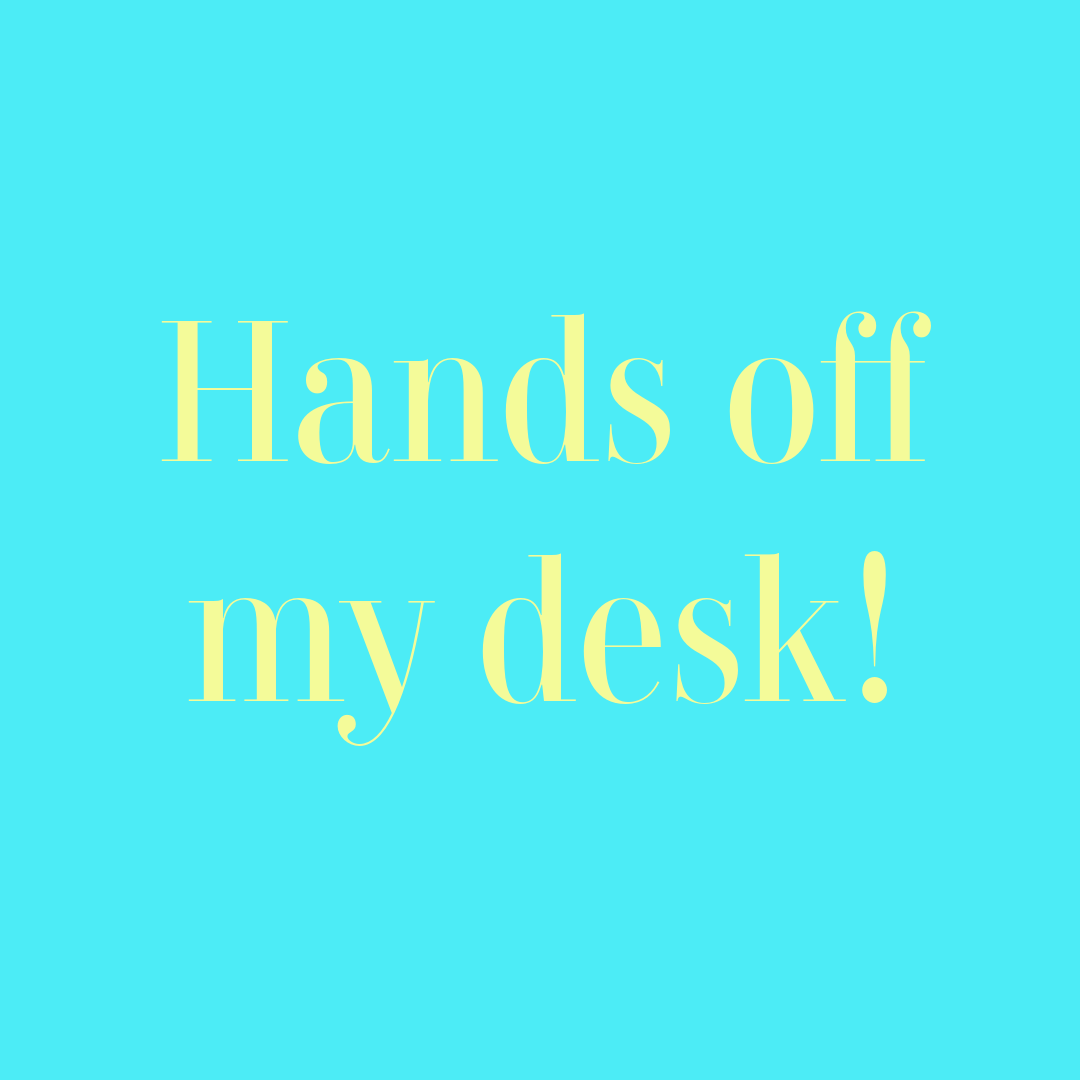 Hands off my desk!

We women now know that status symbols are important. Even if we secretly smile about them.

There's not a single career guide that doesn't include a chapter on company cars, the size of the office, or a parking space on the company premises.

The career-conscious man uses status symbols to show his environment what status - i.e. what rank - he has. So status must obviously be important.

But did you know that there is another axis to consider besides status or rank? If you're a man, you're probably wondering why she's writing about something that's so obvious. If you're a woman, you might wonder, "What is she even talking about?".

I am taking about territory. The dictionary defines it as “(an area of) land,…, that is considered as belonging to…a particular … person”. Animals defend their territory because it gives them access to resources and this is worth defending. The defense of this area is also called territorial behavior and this also exists in humans.

Why is this important? And what does this have to do with our everyday life in companies?

Let me give you an example:

You are sitting at the conference table and are surrounded by your male colleagues. The colleague on the right generously spreads out his private iPhone, his business iPhone and his iPad (I've experienced this exact situation – no kidding). The colleague on the left pushes his conference folder in your direction, then leans back ins his seat and rests his arm on the back of your chair. You're lucky if you can still find a place for your documents; forget about sitting comfortably – that is totally out of the question.

That, ladies, is classic territorial behavior. They make themselves big - wide-legged and -armed (you have an explanation for menspreading now), supported by status gadgets. You can laugh about it, smile, sigh, grin, frown...but that won't change the fact that others are making themselves big and you small at the same time. Big territory means "big animal". If you let your colleague get away with this and allow them to infringe on your space, then at the same time you make it clear that you are content with a small territory - and that you are a small "little animal". And what do we think about "little animals"? We might find them cute – but we sure don’t take them seriously.

But there is a solution: when you first sit down, spread out your documents and gadgets, extend your arms to the right and left, sit back tall and if someone comes too close, don't move an inch. The person will then quickly realize that there is nothing to be gained here in terms of territory.

Next example: You are sitting at your desk and a colleague, who should also be treated with caution, comes in. And leans against your desk. Shortly after, he almost sits on it - on your documents. And looks down on you nicely from above, while you wonder why you actually feel so uncomfortable.

This is territorial behavior. He tests you to see what you will allow in your territory. And once he has established himself in your territory, this will encourage him to increase his sphere of influence more and more. Even worse if you happen to have an audience, this behavior also sends a message to others.

So what should you do when this happens?

When this colleague comes in, stand up and go to meet him so that he cannot sit down on your desk. If he wants to have a short chat you can do that standing up. If it takes longer you should move to a conference table where both of you can sit down, anyway.

Even if we think this is rather ridiculous - territory is the second important axis next to status in vertical communication systems researched by Deborah Tannen, an American sociolinguist. Representatives from these systems will always judge you by your status and your territory. And since the majority of companies are run by people from vertical communication systems, we can't be indifferent to this.

These representatives expect you to make your rank clear and to defend your turf. If you don't, they assume that YOU don't want to play along - and that your turf is up for grabs. Therefore, you should go through your everyday life with open ears and eyes and pay attention to whether a status and territory oriented person is fishing in foreign waters - namely your own. And if this is the case, stop him immediately.

I have always found the following saying very apt: What do corporate politics and rain have in common? You can ignore both, but you will most likely get wet.

The same happens, in my opinion, when we ignore rank and territory.